Buy airline tickets Alicante – Lviv in installments up to 12 payments

A European city with a rich history, narrow cobbled streets, magnificent Gothic and Baroque architecture, numerous museums, and creative establishments will kindly welcome you both for a short weekend and an extended vacation.

With SkyUp, you will not have to do anything extra. With just one click, you can check in for a flight, choose a convenient fare (Basic, Standard, or Flex, each of which has its advantages), and order additional services (such as transportation of sports equipment or pets). In your account, you can manage the booking, check the changes, and be the first to receive announcements about promotions.

We also recommend ordering dishes from our menu no later than 32 hours before departure and enjoying your meals while flying over the clouds. Choose juicy meat or fish, salads with unconventional sauces, or delicious desserts and relish food like in a restaurant.

The most exciting way to travel around Lviv is by atmospheric trams that run through the whole city. You can buy a ticket from the driver for € 0.3 or pay with a QR code via internet banking directly in the tram for € 0.25.

Start exploring the city from the central part – Rynok Square (Market Square) and surrounding streets. Take a walk along the narrow cobbled roads, listen to street musicians, go to cute souvenir shops, drink aromatic Lviv coffee, and look into tiny courtyards. But we primarily recommend going to the courtyard of the Armenian Cathedral of the Assumption of Mary of the 14th century. The temple, decorated with frescoes inside, and the entire central part of the city, are the UNESCO World Heritage Site. And also, you can look in the Italian courtyard, the columns and arches of which can remind you of Italy.

Then you can climb the tower of the main town hall (€ 1.55 for adults and € 0.62 for children). Climbing the 365 stairs is worth seeing the clock mechanism and watching the bustling old town from above.

Then, take a walk to the Lviv Opera, the construction of which began in 1897. Columns and statues on the theater's facade are made in the Neo-Renaissance and Neo-Baroque styles.

We also recommend strolling in one of the oldest parks in Europe named after Ivan Franko. This park has existed since the 16th century, according to the website of the Lviv City Council. Here you will find many shady benches, a beautiful central alley, and a 19th-century rotunda. And opposite the main entrance to the park, the elegant Lviv University is. And you can continue your rest in Stryiskyi Park, enjoy nature, including the lake, and feed swans and squirrels.

The Church of Sts. Olha and Elizabeth is also worth seeing, and it is located not far from the central train station. This 88-meter-tall neo-Gothic church is one of the tallest buildings in the city. Pointed spires and lancet windows will not leave anyone indifferent. In addition, you can listen to the organ in the temple.

First of all, we recommend trying the Ukrainian national dishes: pierogi (boiled unleavened dough with filling), borscht (a liquid dish with chopped beets), pancakes with different fillings, and potato pancakes with sour cream.

For dessert, it is worth ordering Lviv cheesecake with chocolate glaze and drinking cocoa or Lviv coffee with a rich taste. In addition, the establishments serve homemade sweet tinctures of various berries and fruits and craft beer.

Embark on a journey through the castles of Lviv region. Olesko, Pidhirtsi, and Zolochiv castles will surprise you with their antiquity, historicity, and elegance.

You can also go to the Tustan national reserve in the Carpathians. In the museum, among the majestic rocks, you can enjoy the picturesque landscapes and visit the annual festival where medieval workshops and reconstruction of knightly battles take place. And in the village of Slavske, you can arrange a mountain vacation and bathe in a hot Carpathian tub overlooking the mountain valleys.

Alicante – Lviv flight tickets are available on the SkyUp Airlines website. Visit the website and select the desired date. 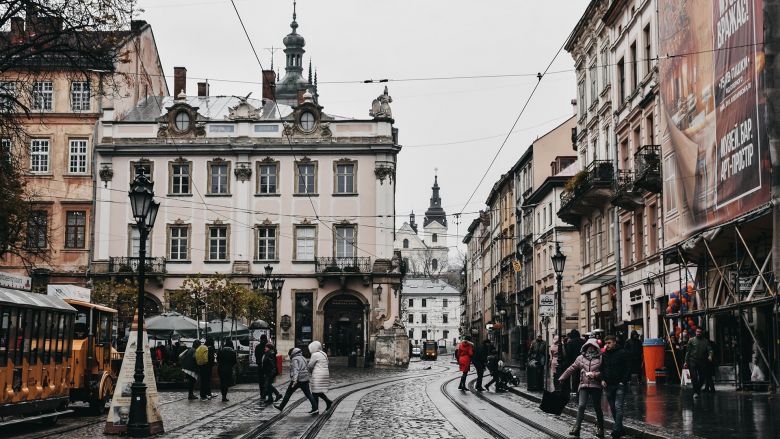