Buy airline tickets Kyiv - Corfu in installments up to 12 payments

Corfu is the administrative center of the island of the same name off the northwest coast of Greece, washed by the waters of the Ionian Sea. There are many medieval monuments in the city, among which are two Venetian fortresses Paleo-Frurio and Neo-Frurio, and the palace of St. Michael and St. George. Many empires and states have ruled over the island at different times and all of them have influenced the way Corfu looks today. Discover the mysterious resort and SkyUp will make the trip to it easy:

— Delicious SkyUp menu, which was developed in cooperation with the leading catering agency and tastes just like in a real restaurant. Can be ordered at the time of booking or in your account, but not earlier than 32 hours before departure.

Corfu-Cerkira - the city with a special name

The city and the island have two names: Corfu is the official Greek name and Corfu is the Italian name. The Greek version is associated with ancient myths. According to one of them, Poseidon, God of the sea, fell in love with Kerkirka, daughter of the God Asopa and the river nymph Metopa. The possessor of the sea kidnapped Kerkyra and brought her to the island, which he named after his beloved. And on behalf of their son Theak, the local population began to be called Theak. The Latin transformation transformed the term to Theacians.

The name Corfu is derived from the Italian version of the Byzantine word ‘korifey’, which means ‘city of mountains’ and is associated with the mountainous landscape and the two peaks of Paleo-Frurio.

It's a 20-minute walk from the airport to the inter-city bus station in Corfu, and a half-hour walk to the port or the Old Fortress. Taxis start at 17,00€* and take 5 - 7 minutes to get you anywhere in Corfu. From the terminal you can also take a bus to the bus station for 1,70€*.

For more than 400 years the city was part of Venice, so the Italian influence is felt in the architecture, especially in the columns with vaults, small antique cafes, and souvenir shops. The Ottoman, British and French reigns have left their imprints as well. This is why the cultural and historical heritage of Corfu is so multifaceted:

— The Orthodox Cathedral of St. Spiridon - the patron saint of the city. His relics are located here. Interestingly, during World War II, a bomb dropped on the temple from an airplane exploded in mid-air without damaging the Cathedral. The 16th-century church was built in the Venetian style and attracts attention with its tall, graceful bell tower.

— The old fortress of Kerkyra, built by the Venetians. Today, several bastions and picturesque ruins attract tourists with beautiful photo angles, and concerts and light shows are held every evening at the gate of the ancient fortification.

— Serbian Museum dedicated to the events of World War I. Kerkyra became a refuge for wounded Serbian soldiers and a place of rescue. In addition to an exhibition of photographs and wartime items, there is a multimedia exhibition.

— The Maitland Rotunda bears witness to the influence of English culture here. It was built in honor of the first English city commissioner. The Palace of St. Michael and St. George, the former residence of the British governor, is also worth a visit.

Where to go nearby?

The island of Corfu has hundreds of pebbly or sandy-pebbly beaches, which have been awarded the Blue Flag for the cleanest water. Almost every resort near the capital has good and quiet beach areas. So feel free to go to Feathers, Kanone, Benitses - they are located closer to Corfu town. One of the best places for a family vacation is the Aqualand water park in the central part of the island. There are areas for children, a calm ‘lazy river’ for leisurely adults, several extreme entertainment zones, and a spacious pool with waves.

Kyiv - Corfu airline tickets are available on the SkyUp Airlines website. Go ahead and choose the desired date.

* All the prices in the text are valid at the time of publication. 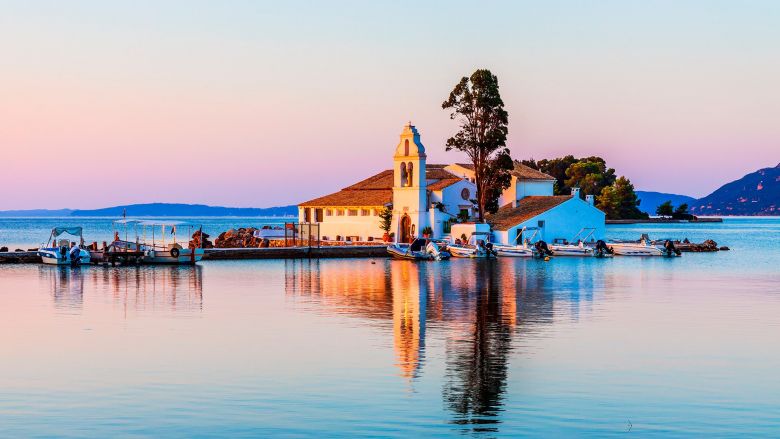