Buy airline tickets Kyiv - Lisbon in installments up to 12 payments

Lisbon isn’t just the capital of Portugal but also one of Western Europe's most ancient cities. Travelers are attracted with its old buildings adorned with white and blue mosaics on the facades and red-tiled roofs. The westernmost point of the European continent, Cape Roca, is also located here. Hopefully your trip to the prominent seafarers’ cradle will be interesting and enjoyable, and SkyUp is going to take care of its hassle-free beginning:

— In the personal cabinet you can buy additional options, such as: onboard meals, additional baggage, seat selection, animal transportation, etc.

— SkyUp’s tasty menu developed in collaboration with a leading catering agency and as delicious as at a real restaurant. It can be ordered at the time of booking or in the personal cabinet, but at least 32 hours prior to the departure.

The city has a lot of ups and downs connected with zigzags of staircases. For the citizens’ and visitors’ convenience there are elevators and cogwheel railways here. The best known elevator, Elevador De Santa Justa built as early as 1902 connects the downhill district Baixa and the uphill district Chiado.

You can get from the Portela airport to the center of Lisbon by bus, metro, group transfer, or taxi. A bus or shuttle ride will take as long as 30-40 minutes, the fare is equal to €1.8* and €3.5* respectively. A metro ride will take 20 minutes, with the fare equal to €1.9*. The services of taxi are available starting at €32*, the transfer takes about 15 minutes. If you have a lot of baggage the best option is to use the metro or taxi. The only public transport running at night is the bus.

Over the more than 24 centuries of human existence in this place, many objects have been created that became popular tourist attractions. The most prominent ones are as follows:

— The Jeronimos Monastery which used to be owned by the Catholic Order of Saint Jerome and is now listed as one of the UNESCO cultural heritage sites. Its construction lasted for several centuries and was completed in 1601. Nowadays it accommodates the National Museum of Archaeology and the Maritime Museum.

— The Torre de Belem fortress is UNESCO protected as well. It was erected in the 16th century to commemorate Vasco da Gama’s discovery of the sea route to India. The tower is designed in the Gothic and Mauritanian styles, and decorated with the royal family’s emblems.

— The world’s oldest bookstore that has been in business since 1732.

— The Monsanto Forest Park, 10 km2 in area, which amounts to 10% of Lisbon’s territory. It is one of Europe’s largest city parks.

A double room can be rented starting at €16*, the prices for triple family rooms start at €21*. The popular hotels are Hotel Do Chile with a double room for €66*, Geronimo Guest House Belém with a luxury suite for €77*, and InterContinental Lisbon, an IHG Hotel, with deluxe suites for two starting at €138*.

What to visit nearby

The popular tourists attractions on the outskirts of Lisbon are:

— Cape Roca located in a suburb of Lisbon, offering a breathtaking view of the Atlantic Ocean.

— The city of Sintra, charming with its bright palaces and original villas surrounded by lots of green slopes.

Airline tickets from Kiev to Lisbon are available on SkyUp Airlines’ website. Follow the link and select the desired date.

We also give you the possibility to purchase airline tickets from Kiev to Lisbon on the installment plan. Fly now, pay later.

* All the prices quoted in the text are relevant as of the date of publication. 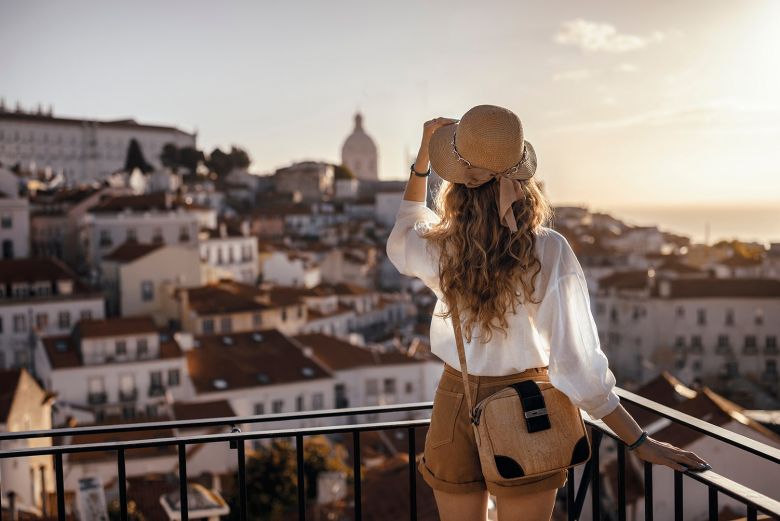