Buy airline tickets Kyiv - Malaga in installments up to 12 payments

Malaga is a large port and resort in the south of Spanish Andalusia. You can get around its historical center in one day, discovering the ancient fortresses of Alcazaba and Gibralfaro, the city hall, the Roman theater, built in the 1st century BC, the Bishop's Palace, and the Cathedral. In modern districts with skyscrapers and huge shopping malls, you can go shopping, and the nightlife is bubbling in clubs all year round. Get to know the birthplace of Picasso and Antonio Banderas, where more than just a beach holiday awaits you. Travel to Malaga in comfort, because SkyUp takes care of an easy flight:

— The delicious SkyUp menu, developed in collaboration with a leading catering agency, is delightful like in a real restaurant. You can order it at the time of booking or in your personal account, but not less than 32 hours before departure

Malaga is a city of hot beaches and refreshing sea

The coast of Malaga has 16 official beaches, the cleanliness and well-groomedness of which are constantly taken care of. Most of them have free toilets, playgrounds, bars, restaurants, volleyball and football grounds, as well as affordable rental of water equipment and sun loungers. You can relax and swim for free. Almost the entire coast is covered with black sand, and on the beaches of Baños del Carmen and La Araña, the sand is mixed with small pebbles. The most popular of them are located in the central part of the resort - Pedregalejo, San Andres, La Malagueta, La Misericordia.

The Line A Express Aeropuerto bus runs from the airport to the city every 20-30 minutes, the ticket for which costs 3€*. You can get there by commuter train on line C1 for 1.8€ for an adult and free of charge for children. A taxi ride costs from 25€. You can also order a transfer, the cost of which is calculated individually.

Malaga is rich in attractions with an interesting history. We recommend visiting the following attractions:

— The Alcazaba fortress is one of the main attractions of the city and the entire region. The fortress was built in the 11th century by the order of the Berber ruler Badis ben Abus, and throughout its history, it has undergone many reconstructions. The walls of the fortress were built so that each next wall was higher than the previous one. Here you can admire beautiful arches, mini ponds and fountains in addition to the unusual design and the opportunity to enjoy a panoramic view of the city from the top of the fortress. We advise you to take a walk among the green spaces around the Alcazaba, inhaling the scents of jasmine and orange trees.

— The Baroque Episcopal Palace is one of the most beautiful in the city. The palace was built in the 18th century and has an unusual architecture with many balconies, passages and stairs. The Museum of Sacred Art operates in the premises of the palace.

— The Cathedral, which is called the pearl of the Renaissance in Andalusia in guidebooks. Its construction began in 1528 and lasted over 250 years. Baroque features on the facade with arches, marble columns and luxurious interior decoration are clearly visible in the architecture of the temple. The detailed sculptures in the De los Reyes Chapel, engravings and medallions are especially impressive.

— Automobile Museum of Malaga, opened in 2010. The museum is located in the building of a tobacco factory built in 1927, which also looks very nice. More than 100 rare and modern cars are collected inside. 10 halls are divided by theme and era. For example, cars powered by alternative energy sources, including solar panels, are exhibited in one of the halls.

Most of the hotels are located in the city center and the coastal zone. The cost of double rooms and suites for families starts from 10€* in 1-2 star hotels, and from 120€* in 3-4 star hotels. The housing cost is on average 80-170€.

The National Marine Park operates 100 km from Malaga in the Costa Tropical area. Octopuses, lobsters, moray eels live in its bays, and the bottom is covered with corals and various algae. We also advise you to explore the reefs and caves near Marbella. You will also be able to see dolphins and sea turtles off the Bay of Gibraltar. Not far from Tore Quebrada and El Faro, tourists are offered excursion programs dedicated to sunken ships. All these places are ideal for diving enthusiasts.

Kyiv​ - Malaga flights are available on the SkyUp Airlines website. Follow the link and select the desired date. 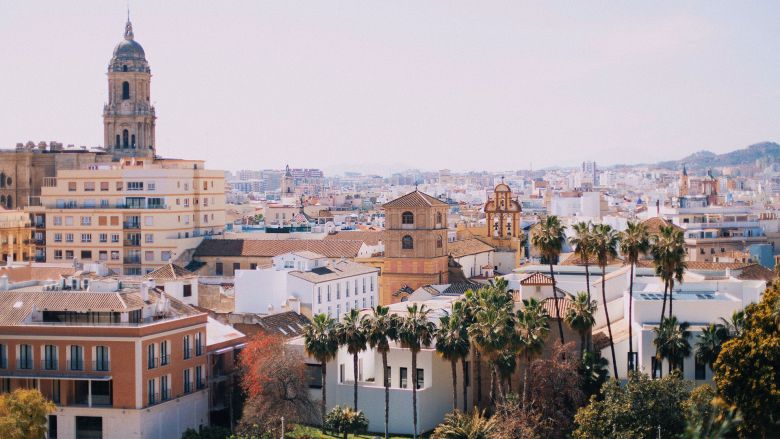