Buy airline tickets Kyiv - Tenerife in installments up to 12 payments

The largest Canary island where a dormant volcano is asleep to the sounds of the loud Santa Cruz de Tenerife carnival: all of this is about the well-known Spanish resort of Tenerife. Plunge into the sea of adventures together with SkyUp:

— In the personal cabinet you can buy additional options, such as: onboard meals, additional baggage, seat selection, animal transportation, etc.

— SkyUp’s tasty menu developed in collaboration with a leading catering agency and as delicious as at a real restaurant. It can be ordered at the time of booking or in the personal cabinet, but at least 32 hours prior to the departure.

Tenerife: a mysterious and vigorous resort

This place encapsulates a lot of interesting things: from wild beaches with black sand and picturesque settlements to luxurious clubs, boutiques, and monuments listed as UNESCO heritage sites. Next to the prehistoric forests, there are fertile valleys with tropical plants, mountain groups with steep slopes, and lava labyrinths. In the city itself, life bustles like a turbulent river during the Santa Cruz festival and the firework battle.

The mild Mediterranean climate with minimum precipitation allows for comfortable rest in Tenerife at any time of year. The daytime temperatures hold at about +15-21 degrees in winter, and can reach 28 degrees from June to October.

The only way to get to the city center by public transport is the bus. The fare is €2* to €10* depending on the distance you are going to travel.

Next to the waiting room there is the taxi rank, their cars are white in Tenerife. The cost of each kilometer of the journey is €1.7* in the daytime, increasing by 25% after 22:00. They charge €3.15* for calling the taxi service.

A trip to the island of Tenerife will surely fill your vacation with bright impressions and let you take plenty of splendid photos as there are so many interesting and beautiful places:

— The Loro Park, a nature and entertainment complex combining a dolphinarium, a zoo, a water park, and a botanical garden.

— Auditorio de Tenerife, the concert hall in Santa Cruz remotely resembling the opera house in Sydney. It is comprised of two halls accommodating more than 2000 spectators, and a terrace offering a view of the Atlantic Ocean.

— The Basilica of Candelaria surrounded by nine sculptures representing the leaders of the Guanches, the Canary Islands’ aborigines. The most important sacred object is the statue of the Virgin of Candelaria. Next to it there is the Dominican monastery complex.

— The Pyramids of Guimar: mounds with steps, the origin of which still remains a mystery. It is interesting to note that they look like the pyramids erected in Mexico, Peru, and Mesopotamia.

— The Wind Cave, one of Europe’s largest caves formed as a result of volcanic lava movement. It is more than 27,000 years old.

— The La Esperanza Forest with the unique Canarian pines, eucalypts and cedars. The air here is filled with these trees’ fragrance, and is very salubrious.

If you are traveling with children, the best town to stay in is Costa Adeje. Couples are sure to like it in Los Gigantes. Surfers should pay attention to Las Americas and El Medano.

The average cost of a family suite is €60-80*. It is better to reserve suites 2-6 months prior to your trip. Generally, at good hotels located near beaches the prices start at €100*.

What to visit nearby

An exotic entertainment for bravehearts is to spend a night out of doors on top of the Teide volcano, which is organized for tourists at the Altavista mountain tourist camp. We recommend that you bring some warm clothes, as the temperature at night can drop from 25 degrees to zero.

Airline tickets from Kyiv to Tenerife are available on SkyUp Airlines’ website. Follow the link and select the desired date.

We also give you the possibility to purchase airline tickets from Kyiv to Tenerife on the installment plan. Fly now, pay later.

* All the prices quoted in the text are relevant as of the date of publication. 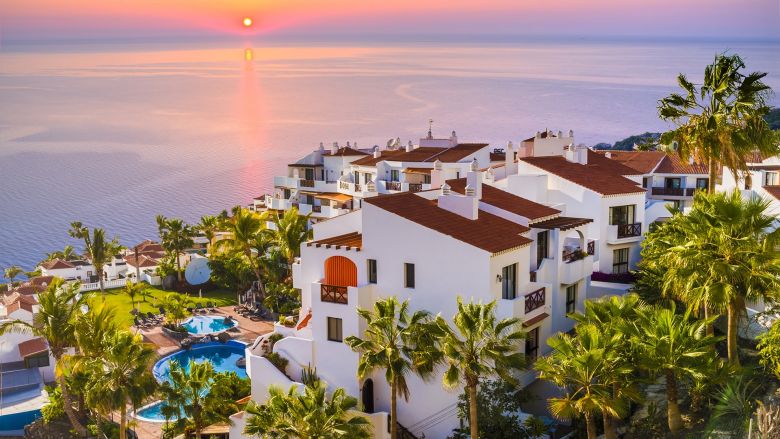