Buy airline tickets Odesa - Lviv in installments up to 12 payments

Soul and history that have been dancing together for centuries. It is delicious here because of coffee, sweet because of caramel and loud because of street musicians. Lviv breathes aesthetics and fascinates from the first moments. And for the enchantment to work inevitably — follow our short instructions.

The fastest, but not the most budgetary way to get from the airport to the city center is by taxi. About €3* and 20 minutes on the way — and you are walking along the ancient cobblestones. Uber and Bolt work here.

Another option is route taxi №48. It costs approximately €0.5*, but due to frequent stops the journey will take longer.

In the city itself, we recommend walking or trams. The latter, by the way, are an indisputable symbol of the city and another way to plunge into its atmosphere. It is more convenient to get to the center by trams №1, №2, №6, №9, №10, because they connect different parts of the city. A ticket costs about €0.1* and can be purchased from the driver.

The surroundings can be explored with a two-wheeled friend. Look for bike rentals closer to the city center.

The main thing is not to try to be in time everywhere. We have formed an indicative and very flexible list of must-see, so that it is more comfortable for you to create your own cultural and interactive program:

— The Latin Cathedral is an architectural monument of several eras, which was originally built as a Gothic, and finished in the Baroque style.

— Armenian Cathedral. An unusual feature of this structure is the three interconnected courtyards that connect the buildings of the cathedral.

— City Arsenal with a huge collection of firearms from different times and peoples.

— Lviv Opera is one of the main symbols of the city.

— The Les Kurbas Youth Theater is one of the most atmospheric and relatively young theaters in Lviv.

— The Potocki Palace is a monument of French classicism.

— Stryisky Park is one of the most beautiful in this region.

— Lychakiv cemetery, which is more like an open-air park-museum.

— Kryva Lypa Street is very picturesque and significant for the city.

— The observation deck of the High Castle is a long walk, but the panorama of the city is worth it.

— The observation deck of the Town Hall — 408 steps and in front of you Lviv from a bird's eye view.

The city has a highly developed gastro- and coffee cultures. Therefore, any meal will turn into an aesthetic and gustatory pleasure.

— National Park “Skole Beskydy” and the remains of the ancient Tustan fortress  among the so-called Uritsky rocks.

— Priyma Grotto is an ancient network of caves.

— Rastochye nature reserve. Its territory covers more than two thousand hectares, and in the northeast it borders on the Yavoriv National Natural Park.

— Lake Zadorozhne with a recreation room, infrastructure, and clean water.

Certainly, you should choose the historical center, so that everything interesting is at hand. A panoramic apartment costs about €15* per night. A hotel room will cost a little more — approximately €20-25* per night, but breakfasts are included in the price.

If you like hostels, then the news is good: a bed in a decent hostel in the heart of the city will cost about €8* per night.

Odesa — Lviv flights are available on the SkyUp Airlines website. Click and choose the date you want.

*All prices in the text are as of the date of publication. 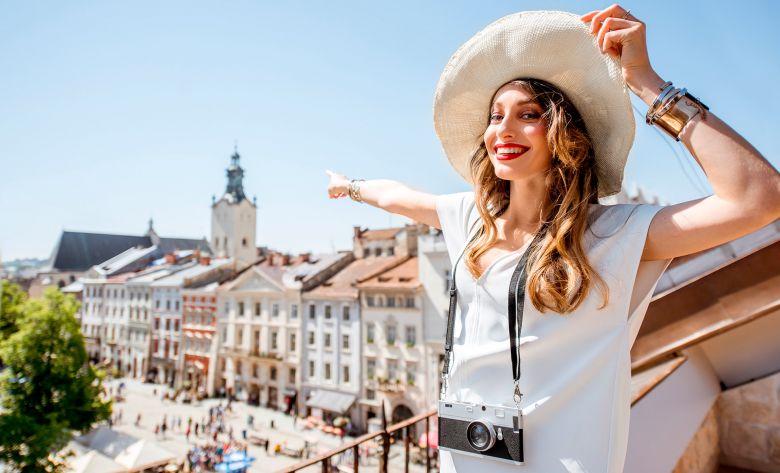