Find the cheapest plane tickets to Ostrava from Kyiv

Bronze for tourist attractiveness and ambition. This is the award that Ostrava can boast of. It is located in the extreme north-east of the Czech Republic on the Ostravice River. The city was once the industrial capital of the country. Now it is unusual, cozy, and comfortable.

The international airport is located 25 km away from the city centre. To get to the city, use one of the available transportation options:

— Taxi. You can use both, local taxi or Uber via your smartphone app.

Ostrava is best known for its huge coal mines, blast furnaces, and metallurgical plants. Therefore, we advise you to start your acquaintance with the city with Vitkovice. This is an industrial area that emerged in the first half of the XIX century. Due to its uniqueness, in 2002 it was declared an object of national cultural heritage. A huge industrial and historical complex with genuine authenticity.

Nearby there is Landek, the largest mining museum in the Czech Republic. It is located on the territory of the former Anselm mine, which was founded at the end of the XVIII century.

Go ahead to the historical part of the city:

— Silesian-Ostrava Castle. It was founded in the second half of the XIII century.

— Masaryk Square is the heart of Ostrava. This market square has been the centre of the city since the Middle Ages.

A paradise for lovers of traditional Czech cuisine: from fried meat to chocolate covered trdelniks.

There are many European and Asian restaurants in the city. The average bill in a decent restaurant will be from €20* per person. A glass of beer will cost from €3*, and a cup of Americano — from €1.5*.

Surprisingly, it's closer to the Polish Krakow than to the capital of the Czech Republic. For example, the distance to Prague is 371 km, while to Krakow — only 170 km. The same is to Brno, a magical Czech city with an age-long history.

Another Polish city, Katowice, is located nearby.

Ostrava is an ideal option to build a dream route around two beautiful neighbors — the Czech Republic and Poland.

The city's tourism industry has made a real breakthrough over the past few years. Therefore, there are many housing options.

Kyiv — Ostrava flights are available on the SkyUp Airlines website. Click and choose the date you want. 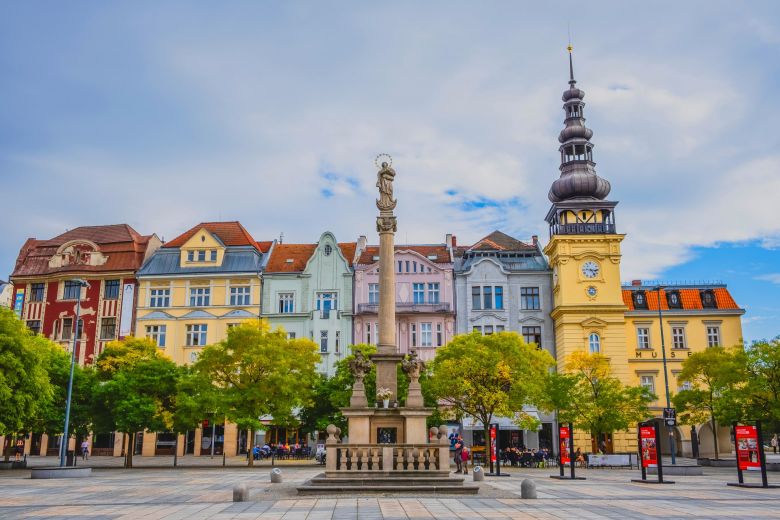