Buy airline tickets Odesa - Athens in installments up to 12 payments

Athens is a city that breathes with antiquity. Walking among ancient buildings, it isn't easy to imagine that history was being created here thousands of years ago. But today, the city is not just an echo of the past, but also lively streets, noisy bars, and cute restaurants.

Head to one of Europe's oldest cities with modern SkyUp services. In particular, our online booking and check-in will significantly save your time and effort.

And at an altitude of 10,000 m, there is an opportunity to spend time comfortably and eat deliciously. Enjoy gourmet meals by ordering them no later than 32 hours before departure.

24-hour buses run from Eleftherios Venizelos Airport to the center of Athens (€ 6, stop at the departure level between exits 4 and 5): X93, X95 і X96. You can also get there on the blue metro line (€ 10 or € 18 for a round-trip ticket valid for a week; from the train station near the main terminal). And for tourists, there is a special option – a three-day ticket valid for all transport, including airport one (€ 22).

The first thing to do in Athens is to climb the Acropolis, the ancient Greek upper city. Many buildings in the Acropolis are half-destroyed, but this does not change the charm of the place. After all, this is the very place where the life of ancient Athens flourished.

The Acropolis has the largest number of ancient Greek monuments, so on the slopes of the upper city do not miss: Propylaea (marble main entrance to the Acropolis), Theatre of Dionysus (where ancient playwrights staged their plays), The Parthenon (the temple of Athena and probably the most famous monument, thanks to history textbooks) and the Temple of Hephaestus (which has largely come down to us unchanged). As well as other temples: Erechtheion, Temple of Athena Nike, Temple of Olympian Zeus. You can also visit the Acropolis Museum, where thousands of exhibits from ancient Athens are collected.

After this historical immersion, we advise you to get acquainted with the modern city. It is best to do this by walking around the Plaka area. Tiny streets, cozy cafes, cute shops of local masters, Instagram stairs, and Byzantine stone churches – here you can relax from the city noise.

And finally, you can look at Athens from a height. You do not have to go far to do this because the almost 300-meter Mount Lycabettus is right in the center. You can go up on foot or by funicular.

Athens is designed to have leisurely lunches in small cafes. From the local cuisine, we recommend trying moussaka (layered casserole with meat and eggplant); comparing horiatiki salad with Greek salad in Ukrainian establishments; and enjoying the tenderness of avgolemono (chicken broth soup with egg-lemon sauce) and mullus (it's such a small fish).

And if you still need to have a quick bite, take gyros (meat with vegetables, wrapped in pita bread) or souvlaki (a small shish kebab with vegetables and a garnish).

We recommend choosing to live in one of these historical areas: Monastiraki, Plaka, Makrygianni, Syntagma. Namely, from there, it is the closest to the Acropolis and other attractions. Hotels in Athens cost from € 25, hostels from € 20, and apartments rent from € 40.

It is worth going to Lake Vouliagmeni for impressions of nature. It has clear water, which thanks to thermal springs has a temperature of +25 in any season. Also, near Athens, there is the mountain range Parnitha up to 1400 m.

And if you feel like continuing to explore antiquity, go to Delphi, a UNESCO World Heritage Site.

Odesa – Athens flight tickets are available on the SkyUp Airlines website. Visit the website and select the desired date. 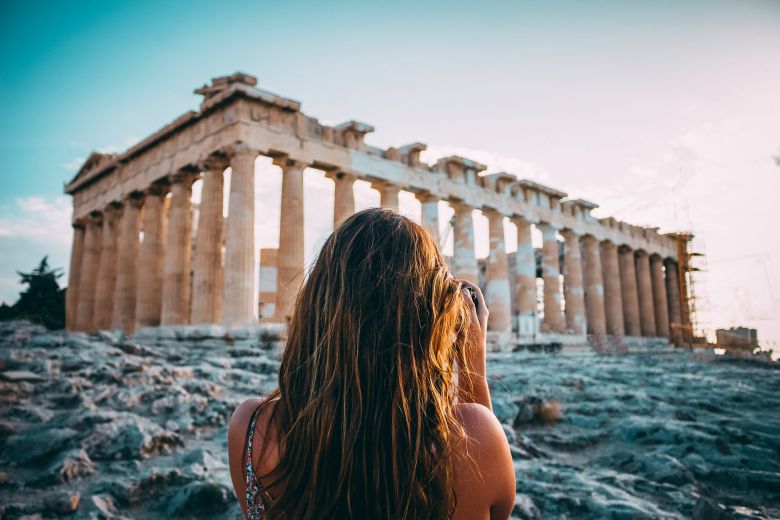